With the team likely to be in a dogfight for the fourth playoff spot in the Central Division this year, Stan Bowman surely has at least an itch to see if the missing piece is out there.

But a league source said Bowman is unlikely to fall into that trap and that he’s still focused on the bigger picture.

“He knows that the success this season is really just a bonus,” the source said. “They’re still looking at another year or two before they’re really done with this rebuilding process.”
Laajenna klikkaamalla

• The Blackhawks aren’t in the mix for KHL forward Damir Zhafyarov as of now. Zhafyarov was recently ranked by The Athletic’s Corey Pronman as the top European free agent available.

Zhafyarov is looking to sign with an NHL team to end this season. The Blackhawks aren’t keen on doing that for a few reasons. One is any European free agent who isn’t on a team’s reserve list would have to go through waivers if signed for the current season because the deadline has already passed.

• Another issue with adding players this season is the Blackhawks are already near the 50-contract limit. They’re at 48 now. They’ll want some wiggle room to take on a contract or two at the deadline.

The Blackhawks are still looking to pursue European free agents, but they’d be signed for the 2021-22 season. No specific names were mentioned, but the Blackhawks are believed to be in the mix for a few players. We hope to have more to report on that soon.
Laajenna klikkaamalla

Now, player development in Rockford is a product of Bernard, King, IceHogs assistant coach Anders Sorensen, who was previously a development coach, Eaton and his development staff working together. That development staff includes Peter Aubry, Christian Burrus, Brian Campbell, Erik Condra, Kevin Delaney, Yanic Perreault and Kendall Coyne Schofield. Each has their own specialty and most will spend time with prospects on and off the ice.
Laajenna klikkaamalla

As the staff has grown, so has the Blackhawks’ approach to development. The IceHogs not only practice, but they also hold skill sessions, usually 45 minutes before practice, to focus on individual development.

“I worked with another team (in the AHL) and I’ve done skill stuff, but this is like a constant,” King said. “Every day, there’s some type of skill going. Some players need different things, other players need this thing, whether it’s skating, stickhandling, shooting. But it’s constant here where every day before we start the full practice, which I guess would be considered the structured stuff or working on building up for the games coming up, we always do skills for 20 minutes to half an hour every day.

“There’s always a group of things to do with forwards, there’s always a group of skills to work with the D and they’re consistent. But then it’ll be down to the individuals. For example, if it’s (MacKenzie) Entwistle and Reese Johnson, maybe they need to work on their skating, on their first two strides. So we’ll take aside Kevin Delaney, one of our skills coaches and power skating guys, and will work with them for 10-15 minutes to get those first strides going.”
Laajenna klikkaamalla "Although we didn’t gather, we were able to honor long-standing tradition by dyeing the Chicago River green," Mayor Lori Lightfoot tweeted Saturday. 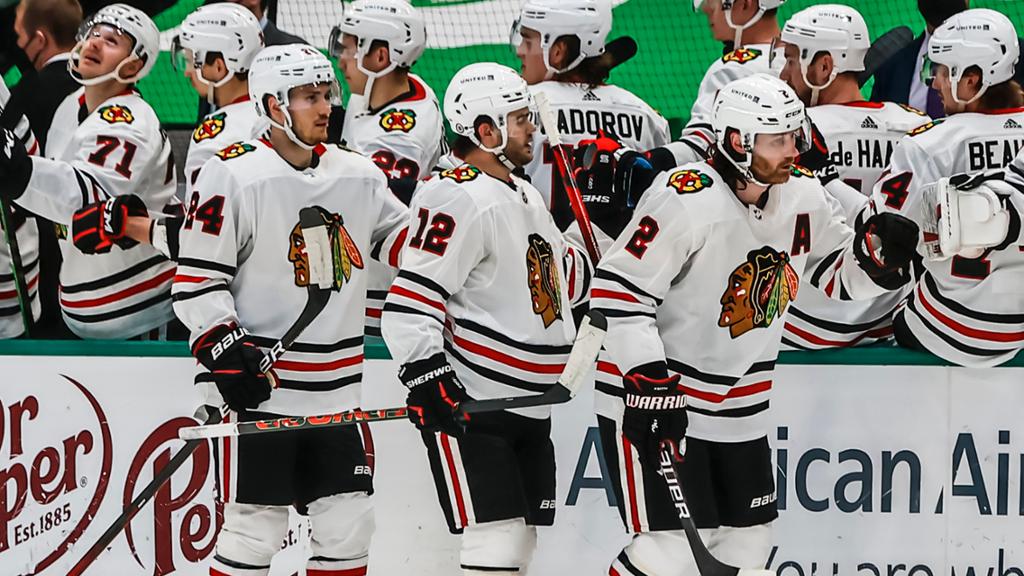 Blackhawks not in market for rentals at NHL Trade Deadline, GM says

The Chicago Blackhawks could be active at the NHL Trade Deadline on April 12, but general manager Stan Bowman said the focus won't be on the short-term.

Toews, 32, has yet to play this season. Bowman said the Blackhawks captain is enjoying watching the young team evolve.

"He seems in good spirits and I know he's liking watching the team and the way we've come out to start the season," Bowman said. "I'm in the same category as everyone. We want him feeling great, not only to help our team but to be back to himself. I don't think he's not quite there, yet but hopefully he will be soon."

Bowman said he believes forwards Dylan Strome (concussion protocol) and Kirby Dach (right wrist), who are skating with the Blackhawks on the road, will be back soon.
Laajenna klikkaamalla