Erosen highlightsit.
"Ralph is known for his hilariously random one-liners, positive attitude and pure loopiness."
I 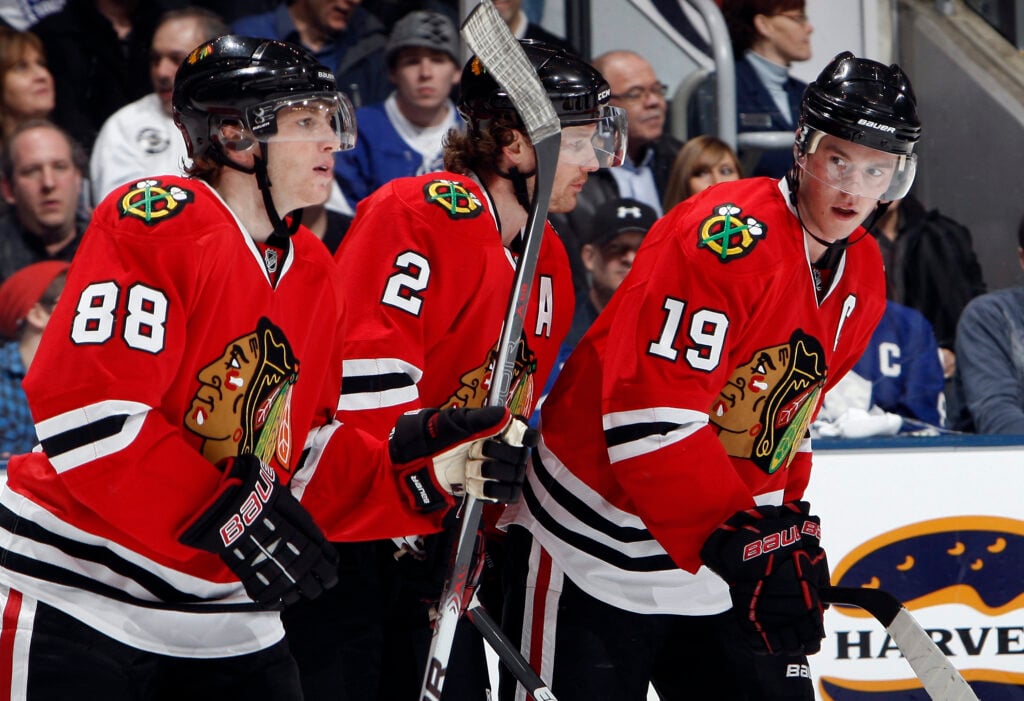 Jonathan Toews talked to The Athletic about the Blackhawks' apparent move toward a rebuild.

Two months ago, Jonathan Toews was back in his element: the Stanley Cup playoffs. Oh, sure, the circumstances were different — the Blackhawks were a 12th seed in an expanded postseason, they were quarantined in a bubble in Edmonton, and they were playing in an empty arena with tarps and giant video screens where 20,000 screaming fans normally would be.

But it was a postseason. A series. A chance at another Stanley Cup — really, the only thing left to chase when you’ve won three championships, two Olympic gold medals and just about everything else you can win in hockey. And sure enough, Toews did what Toews does, leading the Blackhawks past the Edmonton Oilers in four games, posting four goals and three assists in the process. His Game 1 performance can stand up against any of his other virtuoso efforts over the years.

Toews is only 32. He can still play. And he still wants to win.

But two months later, he’s wondering when, or if, he’ll get another chance.

The Blackhawks’ abrupt shift into a full-blown rebuild — kicking Corey Crawford to the curb, trading Brandon Saad to Colorado, not qualifying Drake Caggiula and Slater Koekkoek — has blindsided the final four members of the core.

And Toews, Patrick Kane, Duncan Keith and Brent Seabrook aren’t happy about it. As one source close to the veterans put it, “They’re pissed. The core guys have had enough.”

“Bottom line is, I want to win,” Toews told The Athletic on Saturday night. “The expectation for the other leaders on this team and myself is to come ready to training camp every year to be a playoff team. We prepare ourselves to win a Cup for our fans. I’ve never been told that we were going through a rebuild. That has never been communicated to me, for that matter. A lot of this comes as a shock because it’s a completely different direction than we expected.”

The negotiations — or lack thereof — with Crawford might have been a breaking point between the players and general manager Stan Bowman. After signing a two-year, $7.8 million deal with New Jersey, Crawford said on Saturday that the Blackhawks made one offer, for one year at around $3 million. The Blackhawks never budged and pulled the offer off the table before free agency began, choosing to give Malcolm Subban, Collin Delia and Kevin Lankinen a chance to show what they can be. Crawford said he was “devastated” and “shocked” after the phone call from Bowman.

The core was, too. They were also angry. Yes, Crawford is 35. But he’s still an elite goalie, with a .928 save percentage over the last three months of the season after taking the No. 1 job back from Robin Lehner.

“It’s sad,” Toews told The Athletic. “It’s really disappointing. Crow has given so much to this team. I feel he was ready to bring more in the next few years and still be a big part of this group. He had that mindset that he could help this team go deep in the playoffs again, and there’s no doubt that he could.”


Jonathan Toews said it was “sad” and “really disappointing” that the Blackhawks decided to part ways with Corey Crawford. (Elsa / Getty Images)
The timing of the rebuild is part of the issue. The Blackhawks have spent the past three seasons barely treading water in the Western Conference. But in each of the past two offseasons, they added veterans in an effort to win now. A team source said president John McDonough would never sign off on a full teardown, and the players felt they were making strides toward contention with an influx of young talent such as Dominik Kubalik, Kirby Dach and Adam Boqvist.

The series victory over the Oilers felt like proof of concept to them. But with McDonough fired during the pause and interim president Danny Wirtz bringing a fresh set of eyes — and potentially looking at a season with few fans in the stands, anyway — the rebuild apparently got the green light.

But that came as an unwelcome surprise to the core. Toews is just 32 and is a year removed from his most productive season. Kane remains one of the best players in the world and shows no signs of slowing. Keith is 37, and few can match his competitive fire. And Seabrook is coming off three major surgeries in an effort to get his career back on track and chase another Cup. And they’re all under contract for the next three seasons (the next four in Seabrook’s case).

So none of them saw this coming.

Of course, Bowman is under no obligation to discuss the team’s future with his players. Players play, managers manage. But if any group has earned the right to be a part of the discussion, it’s the one that helped turn the Blackhawks from a hockey black hole into a hockey hotbed (not to mention a money-making machine).

The disconnect between players and management became apparent at the trade deadline in February. While it was a perfectly reasonable and prudent thing to do at the time (back before the pandemic when Lehner figured to command upwards of $7 million in the offseason, and back when Crawford was still part of the plan), the players were disappointed when Bowman traded Lehner at the trade deadline back in February. As one player put it, “The rebuild started then.”

In the aftermath, Kane suggested to reporters that the players who have been around and have been on great teams could have a say in where the team went from there, saying, “I think it’s good to ask the players what they think, to be honest with you. We’re the ones who are playing every night. We see what’s going on in the locker room. … That would be a good road to go.”

But Bowman (who hasn’t spoken publicly since Thursday, when he announced the Crawford decision, but is expected to talk early in the week) largely dismissed the idea when asked about it the next day.

“Yeah, their job is to play hockey, not so much to manage a team,” Bowman said back in February. “I don’t think that’s really fair to them to kind of bring them into the decision-making process. They’ve earned the respect based on what they’ve accomplished, but on a day-to-day basis, just like I don’t go down there and talk to them about their shift last night in overtime — the coaches do that. I think they have their job to do and I have my job to do.”

So what happens now? Keith’s name has surfaced each of the past two trade deadlines, but he’s never been formally asked to waive his no-movement clause. Will staring down the barrel of a two- or three-year rebuild (that’s if all goes well) change his mind?

Keith has been a terrific mentor for Henri Jokiharju and Adam Boqvist the last two seasons. He’s taken to that role incredibly well. And he’s said that he wants to play until he’s 45. But last February, ahead of the trade deadline, he told The Athletic in no uncertain terms that he had no interest in being part of a long-term rebuild.

Then he added, “Shouldn’t we be trying to win? I mean, we’re the Blackhawks, right? Let’s do it.”

Toews, Kane and Seabrook all have full no-movement clauses, too. They are in total control of their destiny. The source close to the group said there’s a sense that Bowman is almost trying to force their hand, to make life miserable enough that they want out, allowing the team to truly tear it down to the studs and start over. From the outside, that feels a little melodramatic. But it doesn’t really matter. The core four are defiant and united that they’re not going anywhere.

“They’re saying, ‘We’re not going to be the ones who go,'” the source said. “We’re not playing that game.”

Maybe Seabrook, who could find himself a rotational player as the No. 7 defenseman, could be open to taking on a larger role with the expansion Seattle Kraken if Bowman can work something out. But even that’s a long shot.

Asked directly if the unwelcome change in direction from management has him re-thinking his no-movement, Toews left no room for doubt.

“I haven’t been a part of that conversation,” he said. “This has all happened pretty suddenly, but the answer is no. Chicago’s my home, and I want to win here again.”